NFTs across Ethereum [ETH] marketplaces seem to have sustained steadiness as July closes. However, the entire NFT market has not fully recovered despite the uptrend in the crypto market and ETH’s uptick.

According to data from Dune Analytics, NFTs’ sales volume across marketsplaces was about 1.46 million. Additionally, active monthly traders seem to have improved. At press time, it was 427,172, meaning that July had sustained a better level for NFT traders.

While sales have maintained some balance, the same cannot be said of the trading volume. A few blue-chip NFTs like Bored Ape Yacht Club [BAYC] and Potatoz have improved their 24-hour trading volume. CryptoSlam reported that BAYC increased 23.98% while Potatoz surged 198.93%.

However, it was not the same situation for others like Sorare, Meebits, and Otherdeed collections, who had their volumes significantly decreased. Even with the improved trading volume of others, the overall dollar worth of many of these NFTs has fallen. Daily trading volume had continued to improve at the time of this writing, and if sustained, the NFT could rise above May and June levels. Still, the volume was far off what OpenSea recorded in May.

Lately, the crypto market has revived, with ETH recording significant gains. NFT traders would have thought the price uptick would influence their collection too. However, that has not been the case.

On the bright side, the ETH rally has contributed to profits made, especially as it increased from $1000 to $1,700. Trading at $1,686 at press time, NFT traders would be hopeful that another price increase would influence the NFT momentum. So, where will ETH head next after an 8.17% increase in the last 24 hours?

The Moving Average Convergence Divergence (MACD) revealed that ETH’s current standpoint favored the sellers. This may indicate why ETH has dipped 1.61% in the last 1 hour. This trend, however, was countered by the Exponential Moving Average (EMA). At press time, the 20 EMA (blue) was solidly above the 50 EMA (yellow). 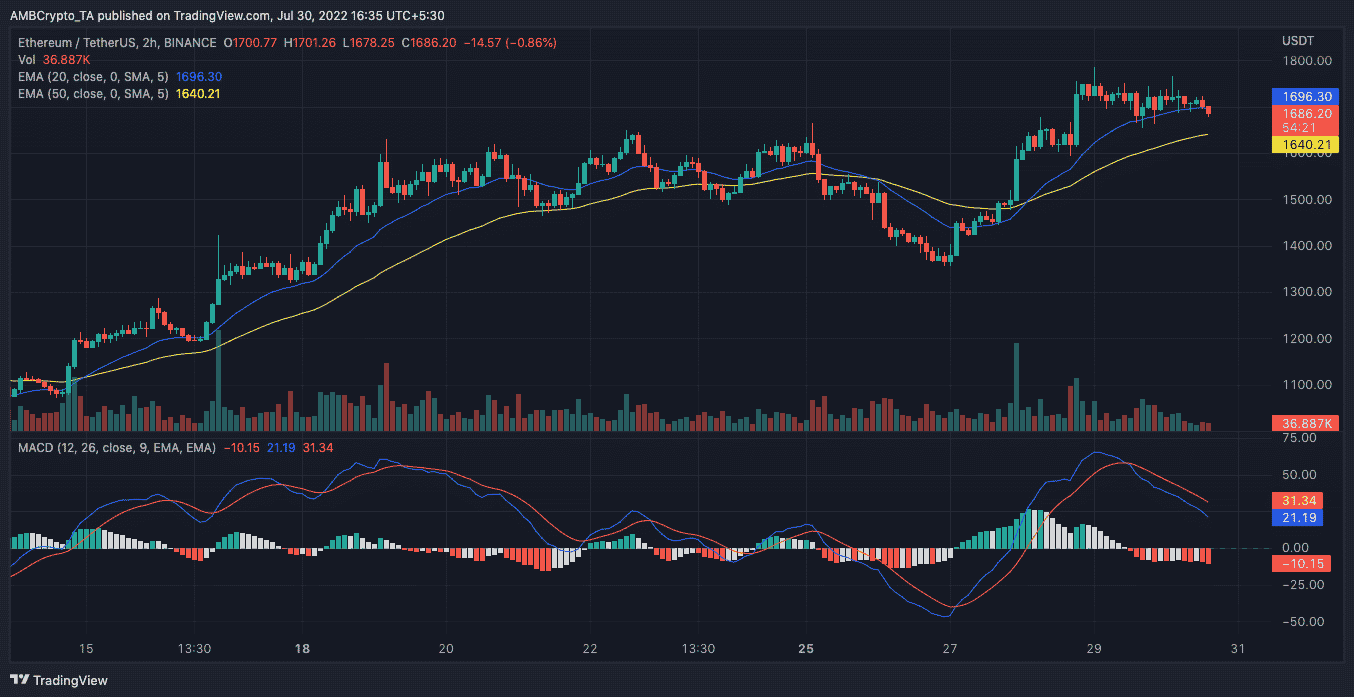 With this conflict of interest, it may seem that the ETH stance was neutral, and helping the NFTs soar may not occur anytime soon. Compared to Solana [SOL] NFTs, collections on the Ethereum ecosystem maintain a reasonable level.